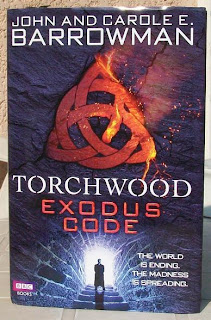 
I have to confess, I couldn't wait to get my hands on this book. While I've read and loved the authors' young adult adventure "Hollow Earth" and also their collaboration for John's autobiographies, I was more than curious to see what they would make of a story set in the Torchwood universe. And they didn't disappoint me. Exodus Code is a fast-paced, action-packed mystery adventure that you can barely put aside once you have started reading (I did an all-nighter to finish it). It has everything that makes Torchwood great: the action, the strange happenings, the quirky humour, the sexual innuendo and the... Welsh landscape. (Yes, a big part of it is set in Wales!) Without giving away who appears in the novel apart from Jack and Gwen, I can say that John & Carole have every known Torchwood character down to a T. These characters come very much alive on the page, and you can easily see them acting out the scenes in front of your eyes.

The novel is set a few months after the events of Miracle Day, which is fading fast from people's minds as they want their normal lives back, when new disturbing and strange occurences across the Earth are threatening mankind yet again. At the center of Exodus Code we have Captain Jack Harkness, the enigmatic time traveller who once travelled with the Doctor and ran the Torchwood Institute in Cardiff for a while. There still is no new official Torchwood, but Jack has a powerful ally in the British government. He also finds old and new collaborators - and after a moment it gives you the feeling that they are a team, at least for this adventure - to stop a global geological and geophysiological phenomenon of a mysterious (alien?) nature that could mean the end of our planet. With the capable help of these people and the Torchwood software, Jack is able to solve the mystery, one piece of the jigsaw after the other. Only until he realises that, once again, happenings from his far and recent past have set the current events in action and nothing but another personal sacrifice can stop it. This leads Jack back to a village in Peru where the action-packed showdown with man and nature will reveal if humanity can be saved and if the sacrifice is not too high.

A breathtaking rollercoaster of a read from beginning to end, Exodus Code sets a new standard for a Torchwood adventure. And I think every fan would be happy to see it come to life on the small or even a bigger screen.

More detailed review with some spoilers - but not giving the plot away ;-)

This novel gives us another glimpse into Jack's past on Earth, when in the opening chapter we see him and a male lover investigating a strange geological phenomenon occurring at the Peruvian coast in 1930. Jack soon becomes the center of an Incan tribe prophecy, which will have huge consequences for the whole planet.

The story then moves to Wales in the present time with Gwen, Rhys and Anwen trying to settle in to a "normal" life without Torchwood. Gwen is not happy, but this restlessness and her rage can't be normal. Is she loosing her mind? This isn't only happening to her but to other women too. She sends out a cry for help to Jack who rushes to Swansea. But it's not soon enough for Gwen, and she ends up in the psychiatric ward after having attacked her family and mutilated herself. Rhys is devastated, and Jack moves in with him and his family to find out what's going on with Gwen and all these other women, not only in Wales but all over the world.

Parallel to this sudden mental illness in women, something is going on with the planet. Earthquakes are happening in unusual places and geysers are shooting up in the oceans. Are these events and the women's illnesses linked? No scientist or government official would dare to say. But Jack, who seems to be the only man also affected by this attack on his senses, is on to something.

What's the strange sign of three interlinked circles that Gwen has carved into her arm? And who's the beautiful girl Jack can't get out of his peripheral vision? And what is the significance of the mountain puma? Jack tries hard to retrieve a memory back from his past that is nagging him, but it is difficult to pin down. He needs help with his research.

Help is on its way in the form of the team of the survey ship "Ice Maiden", whose captain's relationship with Jack has its roots way back in Torchwood's past. After reinforcing the ship's research abilities by linking them with the Torchwood software (and your mind will be blown away at the way that's done!), the newly constructed team heads to Peru where everything started and everything will end, one way or another.

The book is an adult novel, not shying away from describing gory details, using swear words and sexual language. Though sadly we won't "see" Jack's only explicit sexual encounter in the book with the Ice Maiden's cook. ;-) But it's a refreshing mix of sexual openness with Torchwood's (and certainly also John's & Carole's) usual unbiased approach to gender. We have gay and lesbian couples and sexual situations described with no fuss. Jack is his flirty self when he is not suffering too much, addressing his sexual innuendo to men and women alike.

As I said before, the authors had no problem with making the Torchwood characters real; not only Jack and Gwen, but also Rhys, Mary and Andy, as well as a certain recently promoted CIA agent showing up in a few short scenes. Gwen may be reduced to this madwoman in hospital for a while but she is strong and fights it, and her role becomes quite pivotal in the end. She is still this earthy woman, very much the descendant of Gwyneth who once sealed the rift in Cardiff (in Doctor Who).

Also, her relationship with Jack is coming across beautifully. It's a deeply loving one for both of them. While this is not romantic love, they are even closer than brother and sister. The former Torchwood members are acknowledged in Gwen and Jack's memories and you can feel that Jack is still mourning Ianto very much. The story is also a huge homage to Doctor Who and the person that John Barrowman describes as "the mother of all companions", Sarah Jane Smith.

There are some fan Easter Eggs hidden away: As with Hollow Earth, John & Carole use references to people and maybe places that have a meaning to them. While I was not actively searching for those, I came across some familiar names used for people in the novel. And I'll let you all find out for yourself. ;-)

What I also admired was the cultural, medical and scientific knowledge shown in the novel. Someone has done their research very well, and I suppose that this was Carole at work. I was Googling medical, geological, geophysiological, and marine biology terms left and right while reading Exodus Code. Don't get me wrong, it's not necessary to do that to understand the book. Everything is described very well and in a vivid manner with all the scientific facts packed into suspenseful human interaction. But I was just curious to see where science ends and science fiction starts, and can assure you that the transition is flawless and beautifully done.

The only thing I have to complain about was the end that seems a bit rushed. Yes, we have the big show down at the O.K. Corral or rather the Hacienda del Castenado with the conclusion at the mountain top, which is a satisfying ending to the story. But I would have loved to see a bit more of the fallout and aftermath, in general and in particular. A reunion of the Cooper-Williams family, for instance, would have been nice to witness.

All in all, Exodus Code is one of the most thrilling books I've read in a while. The novel will be out in the UK this Thursday, 13th September 2012.

Exodus Code is dedicated to all the Torchwood fans:

"It feels like it's part of Torchwood's DNA to keep reinventing itself." Julie Gardner